Do Your own analysis
Explore Expert Research & Limited Datasets


For Technical Assistance with HCUP Products:

This report presents national estimates of discharges from the 2012 HCUP National Inpatient Sample (NIS) for records with a primary expected payer of Medicare compared to data from the Fiscal Year 2012 100% Medicare Provider Analysis and Review (MedPAR) inpatient file from the Centers for Medicare & Medicaid Services (CMS). The sampling frame for the NIS includes all U.S. short-term, acute care general and specialty hospitals, excluding long term care, rehabilitation, psychiatric and substance abuse facilities while MedPAR data include Medicare discharges from all of these types of facilities.

This report provides a brief analysis that compares estimates of discharge counts from the Healthcare Cost and Utilization Project (HCUP) National Inpatient Sample (NIS) for 2012 with the Medicare Provider Analysis and Review (MedPAR) inpatient data from the Centers for Medicare & Medicaid Services (CMS).1 Comparison reports for prior years have shown that estimates of several outcomes from the NIS tend to agree well with corresponding estimates from multiple national databases. For full information on these databases and complete details on prior years' findings, refer to earlier versions of this report on the HCUP-US website under the heading "NIS Comparison Reports" at http://www.hcup-us.ahrq.gov/db/nation/nis/nisrelatedreports.jsp.

This report compares just one estimated outcome from the 2012 NIS, Medicare discharge counts, with counts from just one other database, the 2012 MedPAR file. Although the scope of this comparison is more limited than comparisons in previous reports, it is nonetheless reassuring to see substantial agreement between estimates from these two data sources for such a significant subset of the inpatient population.

As shown in Figure 1, the 2012 NIS is selected from a sampling frame comprising 44 HCUP Partner organizations. Only six States, plus the District of Columbia, are not included in the 2012 NIS sampling frame: Idaho, Mississippi, Alabama, Maine, New Hampshire, and Delaware. 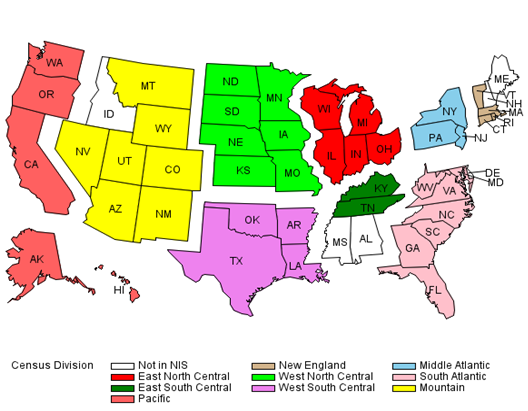 The findings in this report are summarized in tables that highlight differences and similarities in estimates of the 2012 discharge counts between the NIS and the MedPAR.


In the complete tables contained in the appendices, there tend to be larger percentage differences for less common DRGs, but the same pattern continues as those found in Table 1: large differences tend to occur in DRGs that would be most affected by the exclusions of certain types of hospitals and facilities from the NIS sample (long-term acute care facilities, rehabilitation hospitals, and substance abuse and psychiatric facilities).

The 2012 NIS appears to provide reliable national estimates of Medicare discharge counts when compared with MedPAR data. Although the MedPAR data might be favored for studies addressing solely Medicare enrollees, the NIS would be favored for all-payer studies or even for special Medicare studies in which the all-payer context is important, such as analyses of the impact of total surgical volume on surgical outcomes for Medicare patients.

Differences in Medicare Discharge Counts Between Estimates from HCUP NIS and Reports from CMS MedPAR data, Sorted by MS-DRG Number, 2012

Differences in Medicare Discharge Counts Between Estimates from HCUP NIS and Reports from CMS MedPAR Data, Sorted From Highest to Lowest Estimated Number of NIS Discharges, 2012